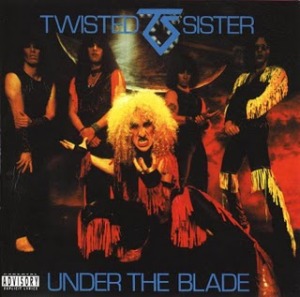 TWISTED SISTER
UNDER THE BLADE
(Secret)

This loud bunch of dirt bags achieved major chart success in the mid-eighties and are best remembered for the hits from that period – ‘We’re not Gonna Take It’ and ‘I Wanna Rock’. But it’s a long way from the gutters of New York to arena’s around the world – yet another overnight success story many years in the making and if you think the Godzilla-like anthems off 1985’s ‘Stay Hungry’ were the best that Twisted Sister had to offer, think again pal. Formed in the mid-70’s by school buddies Eddie Ojeda and Jay Jay French, Twisted Sister played all the local traps, but it wasn’t until they recruited vocalist Dee Snider in 1977 that the band really started making their presence known. Bassist Mark ‘The Animal’ Mendoza joined via the mighty Dictators with Tony Petri warming the drum stool. In 1979 they cut their first single – the very rockin’ ‘I’ll Never Grow Up, Now !’ (later included on the re-mixed version of this album on Atlantic). Despite building up a solid local following, it was in England that Twisted Sister found a strong fan base – their crunching rock/metal hooks appealing to the denim clad headbanger who loved it loud or not at all. Garnering good exposure via Sounds and Kerrang magazines, they landed themselves a spot at the Reading Festival. A sizzling performance that day lead to a deal with Secret Records, which was also home to the Exploited. A line-up change in 1982 saw AJ Pero replace Petri, in time for the recording of ‘Under The Blade’ – which was released on 10 September, 1982 and what a record ! From the moment the needle hits the vinyl, it’s a trip to hell and beyond. ‘What You Don’t Know’ is all blazing energy, Snider’s hoarse throat in damaging form, whilst ‘Shoot ’Em Down’ is soaked in AC/DC raunch. Sister’s sound was once described as “Alice meets Priest in Bon Scott’s back garden”, which is pretty apt. ‘Sin After Sin’ and ‘Tear It Loose’ are other high powered monsters, wailing guitars and grinding chords the order of the day. A nasty appearance on ‘The Tube’ horrified many and the band were now rolling, following a path of chaotic noise which the listening public finally caught onto with the aforementioned ‘Stay Hungry’ LP. Sure Twisted Sister were loud, crude and over the top – but that’s rock n roll ain’t it. If you never got the point then, you won’t get it now. ‘Under The Blade’ is gut wrenching, street level rock n roll at it’s best, a wicked mix of metal riffs and punk energy. Hunt this album down but just remember to do one important thing – play it loud mutha !