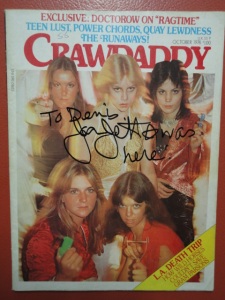 Joan Jett – if there is a cooler girl in rock n roll please tell me, cos Joanie has long been an idol of the Rockbrat’s and I’ll need some hard evidence to think otherwise. With the recent release of the Runaways movie and the kiddies finally getting clued in to some cool rock n roll, I thought it was time to display this. It is an original 1976 copy of the U.S publication Crawdaddy which has been signed by Joan – to the Rockbrat.  She signed a bunch of stuff for me on the 1995 Australian Tour with this being one of them. Rock n roll folks…damn, now I got the Runaways stuck in my brain – and that ain’t a bad thing….sing it with the Rockbrat:  “Little Sister on your roller skates It’s Friday nite an’ you got a date Right in front of the Watergate…..etc