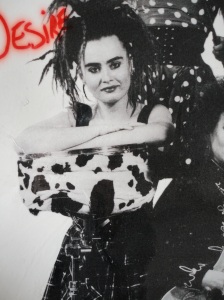 Rockbrat: How did Sandi Novak get into rock n roll ?
Sandi Novak: Well…in High School, (my sister) Janelle and myself formed a kinda post-punk band called The Johso’s, and we played all these punk nursery rhymes like ‘Mary Had A Little Lamb’. Because we were pretty much broke, I had an old Pearl drum kit and Janelle got her first old bass guitar. It was an Fender copy (big heavy thing) – her boyfriend sprayed it pink and white. She still has that bass.

RB: What was the first record you bought ?
SN: The first record I remember buying was a Skyhooks 45, called ‘All My Friends Are Getting Married’. I found a dollar note on the street and went and bought it. I think I was about 9 or 10.

RB: What was the first concert you attended ?
SN: The first music gig I ever went to was a covers band at our High School called The Edge (what a bunch of spunks) My friends were in love with the singer. I was in love with the drum kit !

RB: I am yet to see another band perform live with a lead singer/percussionist. Did you have a drumming background ?
SN: Yeah – I started drumming when I was 12. I also had a pair of bongos, but when I started hitting them with drum sticks Mum got me a kit.

RB: I remember first seeing the band in early 1988, from memory, at the Revesby Roundhouse supporting the Candy Harlots. When did the band form and where was the first gig ?
SN: The Rum Babas formed in 1988, but when we started Mishelle Ker and I both played a full kit and we had 5 other members. Janelle was on bass too. I didn’t start singing til we decided to get serious and Mish, Janelle and myself broke away from the others. I never really intended to be a singer in a band. It just kinda worked out that way, cause we auditioned heaps of girls, but no one gelled.

RB: I recall that the band changed its name to Jezebelle for a while there in 1989, and that Fiona Horne was in the band on second guitar. Why the change of name and how long was Fiona in the band ?
SN: We were told to change our name by Michael Gudinski (Mushroom Records) who came to see the Rum Babas one night at the Kardomah….he also suggested ‘Blush’, ‘Champagne’,’ Scarlet’, or ‘Jezebelle’. He thought that a more commercial name would be more appealing to Mushroom. I remember that we were really pissed at our manager for making us do that. It confused our fan base. Fiona was in the band for about a year from memory. She replaced an American girl by the name of Dircy. Gudinski also suggested that we get a blonde in the band – (from memory he also suggested that she have big breasts ! lol !

RB: I remember listening to the ‘New Noise’ segment on JJJ in 1989, a live to air radio session you guys did with Tony Biggs. Did you do any other radio sessions ?
SN: We did a lot of radio interviews at Triple J and at 2SER (college). We also did a lot of interviews in Melbourne whilst on tour – and a couple in Brisbane too.

RB: The band supported Concrete Blonde in 1990 correct ? Were there any other big name supports ?
SN: I guess we supported a lot of big name bands at the time as we were with The Harbour Agency –  so we were fortunate to play with people like Richard Clapton, Celibate Rifles and Dragon on a weekly basis. I remember playing with David Essex once, and also The Animals. We were massive Concrete Blonde fans so that support was kool.

RB: The Rum Babas often used to support the Candy Harlots. Does any one specific memory for you stand out from those days and the Candys in particular ?
SN: My fave memories of playing with the Candy’s (most of it’s a blur), was when I would go behind the curtain backstage at gigs and sit right behind (drummer) Tony Cardinal and watch him play up close. Cause I knew all the songs like the back of my hand, it felt like I was playing along. Tony’s a great guy, he was kool – they were kinda like our big brothers, cause we shared the same manager. Fun days.

RB: The band had a wealth of great songs, heavy on percussions, and to my ears, your sound had great appeal and offered something different to the mainstream guitar rock bands that were so common back then. I was sure that you guys would make it. Were you disappointed that you didn’t get signed to a big label ?
SN: We were strangely, not that focused on getting a record deal. We had offers from Virgin and Polygram, but our manager at that time was really cagey about letting us sign and we were all so naive, we found out later after speaking with certain people, that the labels wanted the band – but not the manager. In all reality, I think the Babas were probably a victim of mis-management,and a lack of direction. We were gigging 3 to 4 times a week, had a four-man road crew, and a manger and an agency, so we never saw any money. We worked our buts off. But it was fun and an excellent way to cut our teeth in the business. A real education !

RB: Other than the ‘3 Good reasons’ EP, and the appearance on the ‘Rockin Bethlehem’ compilation LP, was there any other official releases ?
SN: No more releases were made. We spent some time in the studio recording stuff for an album for release in Germany on a label called ‘Normal’, but the band split soon after.

RB: I always thought that a pulsing ‘Feel The Beat Of The Drum’ after the Japanese intro-tape ‘Sakura’ was a great way to begin the set – was that your idea ?
SN: I think we had a string of intro-tapes over the years, but Mish and I loved opening with drums, cause it announced to the audience that we were there…and to wake the f%#k up!

RB: Quality wise – tracks like ‘Trash Baby’ and ‘Heartbeat’ still sound fresh and in the Rockbrat’s opinion, rival ANY underground classic to come out of Australia.….what are your favourite Rum Babas tracks ?
SN: My fave tracks were ‘Heartbeat’ and all the percussion stuff, like ‘Rescue Me’, and ‘Beat Of The Drum’. But I think my very favourite song was ‘Windscreen Hazy’. That song was written about a friend that died in a car accident when we were all 16. She was my brother’s girlfriend and Janelle and I were never the same.

RB: Did the band play outside of Sydney ?
SN: We toured interstate to Melbourne and Brisbane and also the A.C.T.

RB: When and why did the Rum Babas call it a day?
SN: We ended the band eventually due to direction disagreements. Janelle and Mish and myself went on to form a trash/sleaze rock band called Honey Slammer. Kathryn didn’t want to play rock music anymore, she was sort of heading in the funk direction and we wanted to rock hard, cause we were listening to Skid Row and Sku Siskin. Kathryn was (at that time engaged to my older brother and it all got a bit much). We were together for a few years and we really grew up together. They are all still my sisters and we still hook up every now and then. In fact we are doing a reformation gig at the Sando in Newtown on the 20th October.

RB: Can you tell me about your most recent outfit Pretty Bionic ?
SN: Pretty Bionic (thanx for asking) is a pop band. Keyboard based. The line-up is myself on keys and drums/percussion, Pru Grimson on lead vox, and KJ on keys and MCing. We play originals and I write the songs,…and DONT SING! I love it. I can relax and do what I love. We just finished recording an album and have been talking to some New York labels, so we are excited and keen to head overseas.

RB: Where does 2010 find the other ex-members of the Rum Babas ?
SN: The other girls are all doing their thing today. Janelle lives down in Melbourne and has two children. She and her husband run a successful homewares business. Mish plays in a country band called Spurs For Jesus and also runs her own art business. She is an amazing and talented artist. Kath lives up at the Central Coast now with her husband Nick and she writes for various Sydney regional newspapers. I’m always at her to play her guitar and never lose that amazing skill she possesses. She laughs at me. Fiona lives in Los Angeles and writes books on witchcraft. She spends her days skydiving and is in a happy healthy place. I am a song writer/vet nurse/animal welfare advocate. I currently live in Sydney and am really happy in my current band. I’m not sure where Dircy is these days, I’ve often tried to find her on facebook, but no luck. I could have sworn that she walked past me at The Cult concert recently at the Big Top. She was from Boston in the States, so maybe she’s living happily over in America.

RB: There is a Rum Babas Re-union this November. You must be looking forward to it !
SN: We can’t wait to hook up in November to play again. It should be pretty kool.

RB: What excites you musically these days ? Who have you been listening to ?
SN: These days I listen to the same stuff I’ve always listened to – Joan Jett, Sheila E (who I jammed with recently) – I’ve been getting into old 70’s funk and I really like some new bands like the Galvatrons and Red Ink. I love the marriage of hard guitars and keys. So I have a real passion for 70’s rock like 10CC, Pablo Cruise and The Babys. My fave new artist is Ladyhawke.

RB: Name your five ‘Desert Island Discs’ ?
SN: My ‘Desert Island Discs’ would be Lou Reed’s ‘Rock and Roll Animal’, Ricki Lee Jones – ‘Pirates’, any Tori Amos album, AC/DC – Back In Black’ and the New Radicals one and only album ‘Maybe You’ve Been Brainwashed Too’. Oh God……can I please take my i-Pod ?!