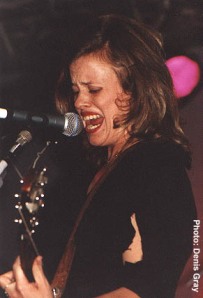 The great Minneapolis trip known as Babes In Toyland rolled into Canberra in 1995 in support of the Nemesisters album. What a great album Nemesisters is. The track ‘Sweet 69’ climbed to #37 on the Billboard Modern Rock chart but top to bottom it’s an album you really should own. The Rockbrat was shooting photos for a local publication and managed to nab a photo pass – which meant freedom to move around in front of the stage. Vocalist Lat Bjelland was a great subject to photograph and this is one of my favourite photographs from that evening. I managed to meet Kat, Maureen and Lori that evening and they were very nice. Babes In Toyland – gone but definitely not forgotten.