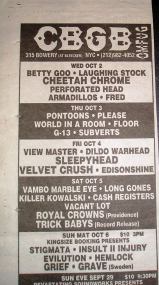 t finished reading former Dead Boys guitar slinger Cheetah Chrome’s autobiography ‘ A Dead Boy’s Tale’ by Legs McNeil and it threw me back to October, 1996 when the Rockbrat and Cowboy Col were hanging out in NYC buying records and seeing bands. Here’s a gig ad from the now defunct yet iconic punk rock venue CBGB’s from Wednesday, October 6, 1996, with Cheetah first on the bill. God knows how many times he played CB’s over a 20 years period. It wasnt long after this that he relocated to Tennessee, so I’m lucky to have seen Cheetah at that point in time.