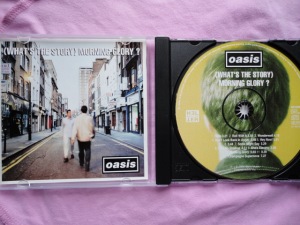 This album went to number one in many countries and sold millions. It’s a freakin classic filled with anthems. Hard to believe it’s now 15 years old. Most of the albums came with a standard silver disc. However some of the discs themselves feature a photograph of the back of Noel Gallagher’s head. Story goes that Noel knew the album was gonna be massive – and that some record company exec (who he wasn’t a fan of) would no doubt hang the million selling disc on the wall – and that he’d be turning his back on them ! Not sure how many were pressed and they’re kinda scarce now, but an interesting Oasis collectable nonetheless.