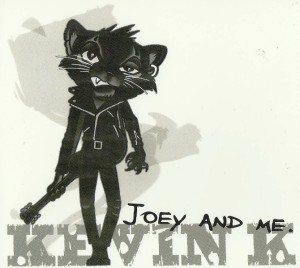 In recent years, Florida based singer/songwriter Kevin K has penned albums that have largely reflected his experiences of touring throughout Europe, and Germany in particular. 2009’s ‘Deutschland’ and last year’s ‘Firestorm’ CD gave the listener strong thematic images of cold war Europe and post war Germany. With consistently strong, original and evocative material, these albums took Kevin K’s music to a new level whilst not forsaking his Johnny Thunders / Dead Boys / Iggy roots . Early 2011 sees the release of his eagerly anticipated ’Joey And Me’ CD, and it does not disappoint. Dedicated to his departed and much loved cat,  Joey, this 10 tracker further illustrates that after 30 + years in the biz, Kevin K is at the top if his game. The album kicks off with ‘Omaha’, an earnest acoustic number about Omaha Beach in Normandy and the D Day landings, with the lyrics again painting a clear picture for the listener.  As anyone who has ever owned a pet will testify, the family cat or dog give a lot of love without asking for anything in return. Happy to see you when you come home from work, Fido doesn’t give a shit what kind of day you had, with tail wagging he’s just happy to see you. That’s true loyalty my friends. When they pass away, the loss, much like losing any close relative or friend, is immense. Kevin K’s heartfelt and moving homage to his cat of 15 years, ‘Joey And Me’ is sad and emotional, and a fitting tribute. Resplendent with harmonica and strings, this song is a highpoint of the album. ‘Smack and Swastikas’ is a gritty guitar pop tune that oozes melody and early 70’s Stones debauchery, iced with jack booted imagery. Another catchy three minute classic from the man who has now penned hundreds of ’em. I can’t find too much wrong with the rockin’ ‘Big Tits’, but then again, like most red blood males I never could:). This is something I could see Bon Scott writing and singing. Great guitar solo too. ‘Still Miss You’ is an up-tempo punk/pop tune that features a catchy chorus complete with a tasty Mike Monroe style sax lick. (This song is a good example of why I think Kevin K’s recent albums are so effective with their use of musical creativity. He’s not afraid to try things, such as adding saxophone to a tune and breaking away from the expected formulae. Go listen to ‘Deutschland’ for further evidence of this). ’Out With The Wrong Girl’ and ‘Cried Over You’ are both infectious and catchy, with the use of sax on ‘Cry Over You’ making it even more appealing to my ears. ‘I’m Dead Already’ is almost a reprise of ‘Joey and Me’, and is about death, closure, life and reflection. Lyrically it’s thought provoking and musically, a nice acoustic tune. That expressive sentiment is continued on the bonus track ‘Windows Of Time’, which is my favourite track on the album. The way the verse breaks into that big, evocative chorus just hits me to the spine.”Running, running, until the end of time”. Sure, it’s again got the thought provoking ‘big picture’ lyrics about life and death and what it all means, but it sure speaks to me. It sounds very much like an Alan K tune, which can only be a good thing, and reason alone for you to go and buy the album. After writing hundreds of songs, as ‘Joey And Me’ testifies, in 2011 Kevin K is still producing the goods and creating inspired rock ‘n’ roll that none of his peers come close to matching. The bass player on the album is Freddy Villano, who in the 90’s played with Quiet Riot and Dee Snider’s Widowmaker. 10 out of 10. Buy it from CD Baby

If you ain’t done so already, tune into Rockbrat Radio and here an interview I conductede with Kevin last September. Check it here.

One thought on “Rockbrat Introduces You To: KEVIN K – ‘Joey And Me’ CD”