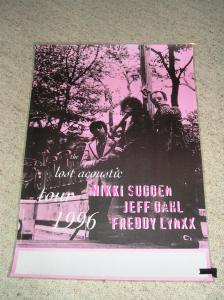 In 1996, Nikki Sudden, Jeff Dahl and Freddy Lynxx did a series of dates together throughout Europe. As the boys were unplugged, the tour was billed ‘The Lost Acoustic Tour’ – that’s right – all acoustic. Jeff, Nikki and Freddy were amazing when the amps were cranked up, but acoustically, they were also exceptional too.  Go check out any of their albums in their extensive back catalogues and you’ll see what I mean. Dahl released a few acoustic albums and they are great great great. Here’s a poster from that very tour which I pulled out the other day and though I’d share. Rest In peace Nikki – never forgotten.