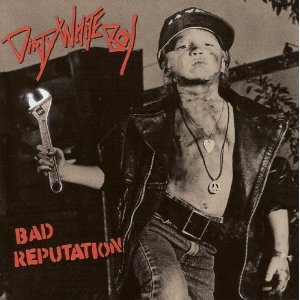 Man this is good album – it still baffles me that ‘Bad Reputation’ didn’t go gold, yet dross like Warrant rose to the top. The cream doesn’t always rise my friends. I’ll be upfront here and say that at the time, this album pretty much escaped my attention. I was certainly aware of it when it was released, but I never bought it, as I (incorrectly) assumed it was more of the standard big hair fare in cowboy boots that was being trotted out of LA (ie: Johnny Crash, Sweet FA etc). Boy was I wrong. Whilst I was wasting my time listening to tripe like Faster Pussycat and Vain, here was a band that reeked of authenticity and had the songs to match. Yet therein lay the problem. There was just so much stuff coming out of LA that looked the same, the public couldn’t see the forest from the trees, so great albums like this one got lost along the way. (The Four Horsemen were another band who suffered the same fate). Yet Dirty White Boy were not a hair band – they were a hard rock band playing melodic, tough sounding bluesy rock with swagger aplenty. Any band with David Glen Eisley on vocals is going to rock hard. Fact. Here he was with plans of joining his ex Giuffria brothers in House Of Lords, only to be pulled aside by Gene $immons to be told, ah sorry, you are not required. David bit back by forming Dirty White Boy with Earl Slick, a guitar slinger who had played with Lennon and Bowie. Throw in the muscle of ex Autograph sticksman Keni Richards on drums and you start to see the makings of a damn fine band. The band formed in 1988, and this, their only album, came out in 1990. By all reports the band were unimpressed with the production on this album. It’s certainly not a clean, big sounding production like you’d hear on a Giuffria album, but I think Beau Hill did a good job – the band play dirty, blues ridden heavy rock – and the production tends to reflect that. I live David’s voice – I think he has one of the best voices in rock, so to me it sounds great. It’s big, it’s ballsy and it’s catchy. Don’t expect polished AOR ala Giuffria – cos you won’t hear it. It’s hard for me to single out highlights here – when they are all great. The title track ‘Bad Reputation’ open the album with throttle fully open. The bluesy ‘Lazy Crazy’ is also very catchy, whilst ‘Lets Spend Mommas Money’ rolls and tumbles and has a Richards/ Ron Wood groove – and even some rollicking piano – with David’s rockin’ vocals the cream on the cake. This cat can sing all right. ‘Hammer On The Heart’ rocks hard with those catchy hooks, whilst the gritty ballad ‘You Give Me Love’ is another highpoint, with a vocal belted out and some tasty Earl Slick fret work. Why wasn’t this Top 10 ? When this album was in the can, the band must have thought they had a monster album in the making – and justifiably so. In 1990, bands like Cooper and Aerosmith were back on top – and Dirty White Boy should also have been there. Time has shown that it didn’t pan out that way – yet they still left one hell of a great rock n roll album. After 31 + years of listening to rock, I can honestly say that NO ONE has a better voice to sing the big ballad stuff quite like David Glen Eisley. This album ROCKS, 21 years after its release – it sounds better than ever – so crank it up and enjoy one of the great lost rock albums from the late 80s/early 90s.