Well, listening under sufferance more like it.  What did I do to deserve this? My day is not getting any better. First of all, my bus doesn’t arrive this morning – and it takes me 1 hour 50 minutes to get to work. Almost 2 bloody hours! And now to add salt to the wound (note intended pun) the album I get to review is Salty the seal and his Dog boys. l remember when this album came out in 1990, but back then I had veered away from the repetitive LA rock scene and was seeing bands like the Hitmen, Dubrovniks, Lime Spiders, Tribesmen, Turnbuckles, Girl Monstar etc.  I had seen enough bands in cowboy boots playing low slung Gibson’s to last a life time. They looked good – but musically they sucked. So after all these years, Id thought I’d give Salty Dog a decent listen. What kind of stupid band name is Salty Dog anyway? And no, it doesn’t need to be explained to me. I know that the term is slang to describe an experienced sailor who has spent much of their life aboard a ship at sea. And yes, I also know that it has an older sexual meaning. For example, in the traditional song “Salty Dog Blues”, the lyric “Honey, let me be your salty dog” translates to “Let me be your sexual partner.” Dudes, that’s so cryptic and cool – no one will ever get the ‘in joke’. MMMmmmm. Anyway. So today I’ve been listening to the band’s one and only major label effort called ‘Every Dog Has It’s Day’ – and let’s call it an Andy Warhol, two minutes in the spotlight my friends. Lets me start by saying that this is quite possibly one of the WORST major label records to come out of the whole late 80s/early 90s hair metal shooting match. This just STINKS! What the hell were the people at Geffen Records thinking? I’d read that David Geffen used to put total faith in his A&R guys when it came to signing metal bands – that policy surely must have changed after Geffen signed Salty Dog. The A&R guy who signed this band should have been hung, drawn and quartered. According to Wikipedia, Salty Dog were to have a video aired on MTV until their A & R Rep at Geffen (whom they had a dispute with) told MTV that if they were to air the song he would withhold the next Guns N’ Roses video. The video never aired and the band was dropped from Geffen shortly thereafter. What a load of tripe. I think Geffen realised that Salty Dog were a lemon and wanted to offload ‘em quick smart. Salt and lemon – that’s one bitter taste friends! Hang on, let me check the song list on this CD, maybe they 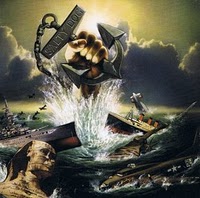 have a song title like that. Nope, but there’s plenty of others that are just as hackneyed. This album displays no originality at all and is indeed, hard listening. Before I get to the songs, let’s take a look at the band. Leather pants? Check. Cowboy boots? Check. Ratted up hair ? Check. Rockbrat tells me that they supported Paul Stanley on his US ‘club tour’ in 89, though that would have only made Stanley look even better. And the Salty songs? The songs are the most contrived you’d want to hear and epitomise every cliché of this era. Every riff is derivative of everybody else’s riffs. The song ‘Lonesome Fool’ even has a banjo riff in it. How funny is that! Let me get to the singer, what’s his name? Jimmi Bleacher. What kind of name is that? Pal, you are far from spared. Jimmi has an annoying shriek, that he must have thought was tres cool – but it’s like a cross between Dizzy Dean Davidson (now there’s an annoying voice) and Tom Kiefer of Cinderella. Man this guy shrieks like a scalded cat. The great songs continue with ‘Ring my Bell’, ‘Where the Sun Don’t Shine’ (which is where I’d like to stick this record), ‘Lonesome Fool’, and ‘Slow Daze’ – Slow Days coming on – talk about a self fulfilling prophecy. The band were obviously talking about 1992, 93 and beyond.  How about the tune ‘Heave Hard (She Comes Easy) Nice and sleazy dudes – doin’ the ladies another favour huh.  Check out these lyrics, “Sweet little baby she’s my hot dug bun”. Please. I just felt like belting half these so called sleaze bands – the salty ones being no exception. What else sucks about this record? The guitar player Pete Reveen puts a little tremolo squeal after EVERY riff. Man that’s annoying. Apparently he is the son of a famous magician named Reveen the Impossibilist. It’s a pity he couldn’t make his son and his lame band disappear. Grunge ultimately took care of that. Cobain thankfully drive a stake through the heart of bands like Salty Dog.  I think there is truth in the rumour that when the ATF were trying to coax Koresh and the Branch Davidian’s out of their hidey hole in Waco in 1991, they were blasting Salty Dog out of the speakers. THIS ALBUM COULD REPLACE BRAN MUFFINS. 1 out of 10. Next!