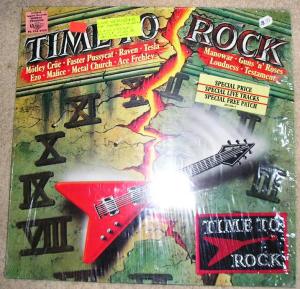 Now in today’s day and age it may be more convenient to log on to the net and download the album you want, or to buy it on eBay, and sure, agreed, purchasing music has never been easier – BUT, buying records was much more fun and way cooler twenty five to thirty years ago. Let me tell you why. Here is an album called ‘Time To Rock’. It is a sampler album from WEA/Atco Music and was released in 1987 and it showcases 12 of their biggest and most prolific metal bands signed to them at that time. I purchased this in the sale bins at Utopia Records (when they were located in Martin Place), in 1987 for the bargain price of $8.99. What’s cool is that it comes with a sew on cloth patch as well. What did I say about digital downloads being more convenient – but boring. Anyway, I certainly discovered a couple of cool bands from this sampler album and this is one album I’ll never part with. Not just because all the tracks are great – but because the whole album, from the packaging to the inserts to the free patch – represent a time when it was cool to discover new bands – and we didnt live in such an age like we do today where everybody has to own every bloody bands discography and have 10 000 albums on their Ipod! People may be time poor – but they own 10 000 albums. Whatever. Anyway, this album includes tracks by Motley (live), Faster Pussycat, Metal Church, Manowar, Ace Frehley, Guns N Roses and Testament too. After hearing the track of these bands, I went out and bought the bands albums – all from 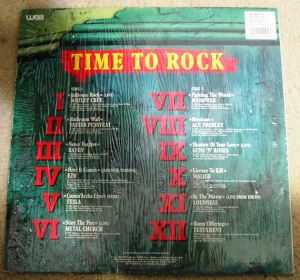 listening to this comp. I became hipped to Raven, and their great ‘Life’s A Bitch’ album, but also the Japanese band EZO, as well as Metal Church, whose ‘The Dark’ album I wore out the grroves on. Side 2, track 1 – Manowar’s ‘Fighting The World’ – Does it get any better ? Anyway, maybe you have a favourite compilation album that you’d like to share ?

One thought on “Classic Album From The Rockbrat Collection: TIME TO ROCK LP (1987) Various HM artists”