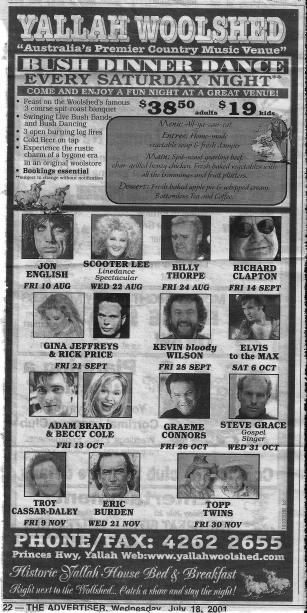 Here are a couple of items from the last Billy Thorpe gig I attended. Friday 24 August, 2001 was the date, the venue was the Yallah Woolshed, in Yallah (not far from Albion Park) in the Illawarra. I have a few memories  of the night, though not as many as I can recall. If I had of known it would be the last time I saw Thorpie, I would have savoured every moment. Alas, hindsight again. I do recall that Screaming Jets bass player Paul Woseen was in his band, as was Pig Morgan on keyboards. Thorpie was blazing away, as you’d expect, on lead guitar. At the end of the gig, I managed to have a quick word to Thorpie, who also signed a CD for me (see photo). Unfortunately I accidentally smudged the signature by shoving it into my jacket pocket before it has dried, but it says, “To Col, Keep Rockin’, Billy Thorpe”. Pretty cool sentiment from the great man. I still think so. I gave him a CD copy of the first volume of ‘Rock n Roll War’ released on my old label Vicious Kitten Records, and spoke briefly about Pete Wells, who was on the album. Great night, great memories, now over ten years ago. Keep Rockin Thorpie….. 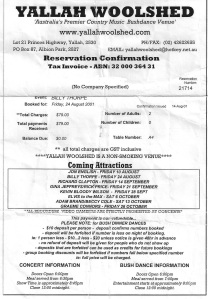