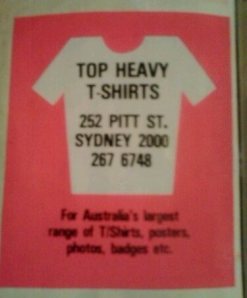 Growing up as an 80’s heavy metal child in Australia… your choice of band tee was of great importance. I recall starting a job around this time and another employee mocking my Quiet Riot shirt. I ‘knew’. He did not. The shirt you wore was your identity…But where could you get one ? You could always write away to one of the shirt companies which advertised in the pages of Circus or Rock Scene magazines….that could take months and the dollar was weak against the American. My how things have changed ! Nowadays Joe Average gets along in his crisp (corporate) Metallica shirt obtained at Target..dude…you may as well wear a Nike shirt…but that story another time. Back in 85…metal ruled my world and you had to show your particular allegience via a band shirt. Top Heavy were in Pitt Street and had a great array of rock merch….and obviously tees. Me and The Cowboy would also head to a factory outlet in Brookvale called Goose’s which had some neat shirts. Centrepoint at 100 Market Street had a cool shop called Impact Imprints (I think) and they too were stacked with imported rock tops. Postcards were popular back then too…as well as buttons and sew-on patches.My Lick It Up and Animalize Kiss shirts were purchased here and they were not cheap. In today’s money it would be around the $100 mark. But under your denim and leathers…you needed one. Anyone else shop at these Sydney stores ?!