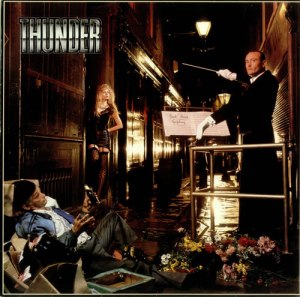 In 89/90, the world’s hard rock / metal radar was predominantly focused on what was coming out of the US, and LA in particular. Which was a real shame, cos there were many great hard rock bands coming out of the UK at that time that didn’t get the recognition they deserved. No Im not talking about Tigertailz, Shy or Last Of The Teeange Idols. I’m talking about bands such as Dogs D’amour, the Quireboys, pomp rockers Magnum, and of course – Thunder. Unless you were British, Thunder were a band largely overlooked even at the time. Even Lisa Dominique arguably had a larger profile, so to speak, outside of the UK. What she lacked in talent she certainly made up for in the eye candy department – and by the way, her brother Marino had the BEST poodle shag going at that time.) Yes – Thunder. I used to see their ads and read about them in Kerrang! Yet its only in recent times that I’ve rediscovered how good this album is. Recorded in 89, released in 90 and produced by Duran Duran’s Andy Taylor, Backstreet Symphony never really bettered this, their debut album. When you listen to this album, you know straight away, that they are British. It sounds British, in the way that Bad Company, Zeppelin and Whitesnake pre-Tawny Kitaen do. The album opens with “She’s So Fine”, a catchy slice of melodic hard rock reminiscent of classic 70s era Brit hard rock. Vocalist Danny Bowes has a style similar to Coverdale – very likeable. They play a dog eared blues style of Zepplinesque/ Bad Company rock that is WAY more appealing than imitators like Kingdom Come. ‘Dirty Love’ is another good tune, catchy, melodic and fun. Great riff and a tip of the hat to classic era Faces. Speaking of the Faces, ‘An Englishman On Holiday’ is totally ‘Had Me A Real Good Time’. That’s a compliment friends.  It’s an ode to that fine tradition that many lager louted limeys undertook/ undertake – travelling to other parts of the continent exalting the virtues of being British whilst being as full as Andy Capp or Roger Melly. Lovely jubbly. ‘Don’t Wait For Me’, the first obligatory ballad of the album, is good. This ain’t a thin sounding CC Deville tune folks – it’s a solid ballad. More Great White than Poison in the ballad stakes – in fact the voice of Jack Russell is not too far removed if looking for another comparison . Man, this could be a Great White tune.’ Higher Ground’ is another solid tune, if a little non- descript.  The title track, ‘Backstreet Symphony’  is another solid tune, with a catchy groove in the riff department, but again, solid, and IMO, not standoutish. It reached number 25 on the British charts however. The riff is infectious, and its the hook that makes this one a good un. ‘Love Walked In’ is total Whitesnake. Great tune. The cover of Steve Winwoods/Spencer Davis’ ‘Gimme Some Lovin’ also scores points, as does the epic ‘Until My Dying Day’, a tune that runs in at over 6 minutes – starts off as a ballad before busting out with a Jimmy Page riff that rocks aplenty. Like many other hard rock bands from those hedonistic days, they are not averse to the odd cliché. From the album title, to the street walker on the cover art, to the, at times, contrived lyrics “second hand sex machine, all over me like a cheap suit, priestess with a black dress on, couldn’t even focus on my own tattoos, I hit him with a stool.” Yes well. They weren’t the only hard rock/metal band of that period guilty of such a crime, and like others, they also took a little of the LA sleaze element of the period, hence the title and concept. Totally unnecessary. In all, many good tunes on this album, with two or three great ones. In 2013, it sounds a hell of a lot more listenable than most from that period. 7.5 out of 10.

One thought on “What’s The Rockbrat Listening To Today ? THUNDER – BACKSTREET SYMPHONY (1990)”