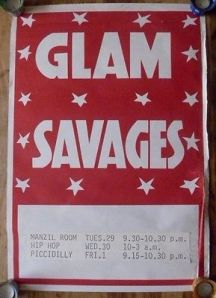 These guys included Mark Easton, ex of The Kelpies and Soggy Porridge, and rhythm guitarist Ron Barrett, plus bass player Nick Szentcuti (plus a couple of others), but these 3 went on to form the original Candy Harlots in mid-1987.’

I love it when this kinda stuff pops up on eBay. As is correctly stated in the spiel, this band was a forerunner to the Candy Harlots – the loud, leather n’ sleaze outfit who had the Syndey underground in a spin back in the late 80s…and a band whom we followed all over Sydney. Cannot be certain but I ‘think’ some of the Candy’s tunes like ‘Vicious Love’ had their beginnings in Soggy Porridge and Glam Savages days – but the memory is hazy. Anyway, I love it when cool stuff like this surfaces every so often. Dig it ! Video footage of this band is pretty much non-existent, so I will add some Soggy Porridge and Candy Harlots instead. If you wanna know more about Mark Easton, check out the audio interview we did with him some time back.