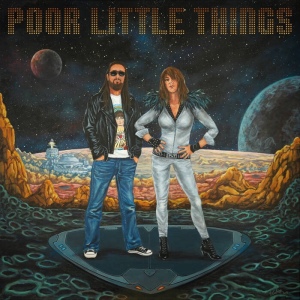 Now, as you’d all know by now, I’m a sucker for hooks and catchy melodies – who isn’t – and lemme tell ya – this EP is brimming with both – and as soon as I hit the play button on this – I was on board.

The rollicking and riff heavy Rock n Roller kicks off the EP and sets the tone – It’s a ripper – 76 . The deep-voiced chorus on this track works well and it’s even got a smattering of cowbell and tinkling piano. This one could’ve been plucked straight outta the Nick Gilder songbook and I reckon Poor Little Things should offer this up to someone like Suzi Quatro or Cherie Currie, as I can envisage either one of those ladies belting this out.

Second track up could in fact my favourite track out of the five which is called ‘Break Another Heart’. It’s extremely catchy – well-crafted pop rock tunage and highlights the alluring and very likable vocals of Tina Jackson. This recording is actually the debut vocal performance from Tina but you sure as hell wouldn’t know it. Break Another Heart even comes complete with a boisterous ‘hey – ho’ singalong in the chorus, which puts a smile on this face, and really does highlight guitarist Dave Talon’s pop sensibilities – not to mention a knack of being able to add that that little bit of ‘zest’ into a tune – which can lift an already catchy piece of music – to a much higher level – such is the case with Break Another Heart.

Long-time listeners of ours will possibly be familiar with Talon via his work with Rollerball and The Marlboro Men. He is currently also a member of Swiss outfit Captain Control who – incidentally, are about to release a new album next month. Rollerball, who formed twenty odd years back now, churned out some great rock tunage, were way underrated and could consider themselves unlucky not to be embraced by the Triple J cool school and all that it encompassed back then. ‘Oz rock for the new millennium” exclaimed Kerrang magazine back in the late 90’s when referencing Rollerball. At one time, Talon was also a member of Clifford Hoad’s Kings Of The Sun – and played on that ‘Rock Til Ya Die’ record from a few years back. When my brother reviewed that album he gave it an emphatic 10 out of 10, and much of that had to do with what Talon bought to the Kings table. The solid sounding drums on this EP are provided by the way, by Talon’s bandmate in the Marloboro Men, Fernando Malboro who I believe co-produced this release.

Clocking in at just under four minutes – the track ‘Drive’ is up next, and it cooks – veering at times towards Amphlett/McEntee turf, which is always, always gonna put a smile on my face. It’s got tons of energy – envokes images of burning down a straight desert highway, and again, is top heavy on the melody. Listen out for the blazing guitar work on this, cos it’s exceptional. Y’know whilst I’m on that, there are so many great guitarists out there – some really really talented players out there, but what always separates them for me, what it comes down to is tone and feel. Guys like Frehley and Nugent have it in spades and the guitar tone which Talon possesses on this EP, and on much of his other recorded work is really something worth highlighting. Have a listen and judge for yourself as I’m sure you’ll agree – and if that’s not reason enough alone to get ahold of this, I dunno what is.

The song ‘About Love’ slows things down a little and took me on a hypnotic journey which at times – felt like I was seated on a pew at the back of a rock n roll church. I dig this tune a lot.

Y’know I’m not sure if the band name ‘Poor Little Things’ has some significance to the players involved – but a stellar release like really should be behind a band name which lights up , one which boldly stands out and does this project justice. Personally, I’ve always loved one word band names cos they are instant and easy to remember: Oasis, Cinderella, Kiss, Hush, Yes, Heart, Helmet,  Wasp, Hurricane, Venom, Queen, Elf, Journey, Angel, Poison…need I continue. Not a criticism – just an observation from a long time music fan and rock n roll purist.

The heavy rock riffage of Sweet Cheetah ends the EP on a high. It’s awash with pulsating rhythms and some heavy synth which work well with Talon’s vocals. For me, the five tracks passed way too quickly so why dontcha do what I did – and hit that repeat button on your car stereo.  Better yet, you could also try digging into some of Dave Talon’s previous work, cos there’s some very cool tunage in there to search out. I’ve already noticed some positive reviews of this EP onine, and the good news is that there’s hopefully gonna be another release from Poor Little Things due out next year which is pleasing to hear as an album’s worth of material would be very welcome to these ears. I believe that a limited run of vinyl pressings of this EP are planned for early 2019 – so be sure to keep your eyes out for that, as I’m sure a lot of you vinyl junkies out there will be keen to get a copy of this on wax. If you wish to purchase this EP by Poor Little Things – head to poorlittlethings.bandcamp.com and whilst you’re there – be sure to follow em on facebook as well.

This EP reminds me of just how much fun rock n roll should be – it’s got an energetic vibe running right the way through it, and if this was released in the 1970’s I am in no doubt – a couple of the tracks would be all over a.m radio.

Go grab the release via bandcamp as I’m confident many of you really will dig it.