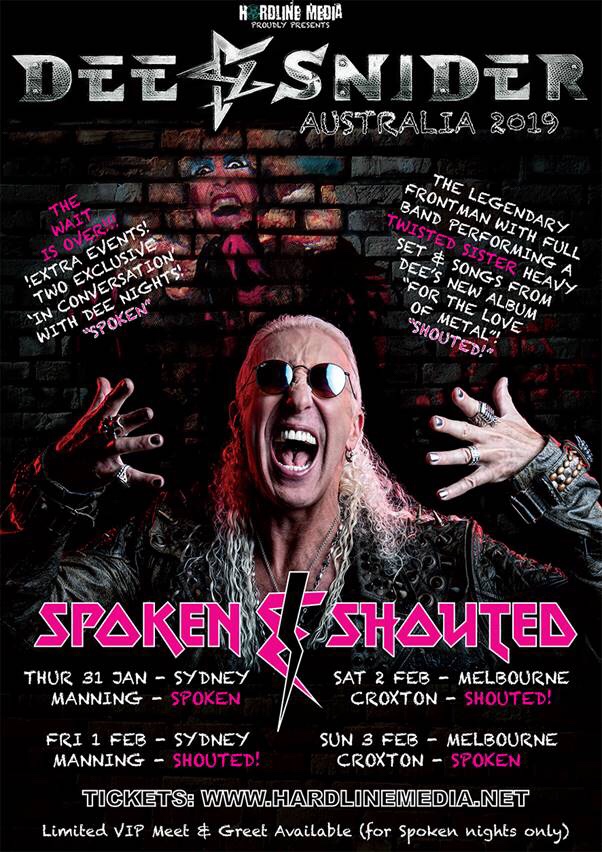 He is one of the most recognisable and notorious frontmen of all time and DEE SNIDER ascended to hard rock royalty in the early 1980s as the lead singer for New York-based heavy rockers, the multi-platinum sellers TWISTED SISTER.

The charismatic and outspoken SNIDER in 1985, alongside John Denver and Frank Zappa, testified against censorship in regard to the Tipper Gore led PMRC (Parents Music Resource Center) — SNIDER and company topped the charts in 1984 with the all-purpose us-against-the-world anthems We’re Not Gonna Take It and I Wanna Rock. DEE SNIDER and TWISTED SISTER changed the face of MTV and the rock and metal world forever.

Apart from those two monster singles,TWISTED SISTER also released all time classic tracks like Stay Hungry, The Kids Are Back, You Can’t Stop Rock And Roll, The Price, Under The Blade and more!

After the 1987 dissolution of the group, he embarked on a series of solo and group projects such as WIDOWMAKER and DESPERADO.

But there is more to SNIDER than just his musical prowess and presence. He has starred in several reality TV shows including The Celebrity Apprentice,Gone Country with John Rich, MTV’s Rock The Cradle with his son Jesse and Growing Up Twisted, an A&E series featuring the entire SNIDER family and their Long Island lifestyle.

He was also a frequent host on MTV Networks and his own long running nationally syndicated radio show House Of Hair is heard on more than 200 stations in North America. His career as a voiceover artist has resulted in Dee being heard in many radio and TV commercials, documentaries and a year-long stint as the introductory voice on MSNBC.

His autobiography Shut Up And Give Me The Mic was a huge success as was his Podcast Snider Comments. He also had a starring role on Broadway in the hit musical Rock Of Ages, there isn’t much Dee can’t do. SNIDER has also just recently unleashed his critically acclaimed new album ‘For The Love Of Metal’

Each city will be treated to one SPOKEN night and one SHOUTED! SPOKEN nights: these will see Dee being interviewed on stage and telling stories about his life, career and a real in depth look at the man himself, then an audience question and answer forum. This will be a very intimate, once in a lifetime opportunity. Plus on these nights there will be a special VIP meet and greet opportunity available, which includes entry to the SPOKEN night, front and second row seats and the first 20 buyers get to ask Dee a question over the mic from the audience, and meet Dee after the event for a photo and 2 items signed.

The SHOUTED nights: These shows will see Dee hit the stage backed by his full band and slam out a killer set list top heavy with classic TWISTED SISTER Material.

Don’t miss the chance to witness a true rock legend the frontman of TWISTED SISTER, DEE SNIDER on stage in two very different environments and two that he absolutely thrives in. If you are a true SMF, you won’t be Dee-sappointed!!! (Info/Source: Hardline Media)