For several years now the Harmonie German Club has built a reputation as Canberra’s premier live music venue for country and blues – and tonight’s show is no exception, with 70’s Oz country rock greats Stars returning to the national Capital after a hiatus of many many years.

In a two hour set of compelling hard edged country rock, Stars delivered a red hot performance that was nothing short of electrifying. Whilst many of their 70’s contemporaries are content to give their audience a set load of nostalgia – Stars included at least eight songs from their amazing new album, ‘Boundary Rider’, a record that presses strong claims for Australian album of the year.

I sincerely hope that the media, music industry and listeners at large get behind ‘Boundary Rider’ (much in the same way as Russell Morris’ recent resurgence) and give it the attention it warrants – for ‘Boundary Rider’ is an album littered with quality songs draped in melodic sensibilities, strong thematic images, and is an album that sits neatly alongside the ‘Paradise’ and ‘Land Of Fortune’ LPs.

Such is the calibre of the songs on Boundary Rider, that they seamlessly fit amongst a set comprised of tunes pulled largely from 1977’s ‘Paradise’ and 1979’s ‘Land Of Fortune’ LPs. Opening with ‘Time Stands Still’, the opening track from ‘Boundary Rider’, the audience quickly warm to the band, with the strong, rich vocals of Mick Pealing resonating throughout the room. Coupled with star quality, Pealing has one of the most distinctive and defined voices in Australian rock, and while pundits rave about whoever is the current flavour of the month in Nashville, I’ll take Mick Pealing any day of the week.

Other cuts from Boundary Rider that are given an airing include the absorbing ‘A Place In Your Heart’, ‘Move To The Country’, the hard rockin’ boogie of ‘Pick Up The Pieces’, ‘Wilderness’, the up tempo and super catchy rocker that is ‘Living A Lie’, the blues lament of ‘Drinking’ Alone’, and the moving title cut, ‘Boundary Rider’, one of four songs on the new album penned by Andy Durant before his untimely death in 1980. The super melodic ‘My Day’ has hit single all over it and is beyond radio friendly. Who the hell needs Poco or The Flying Burritos when you have Stars? If you need convincing of why Stars were often referred to as Australia’s Eagles, listen to this tune. 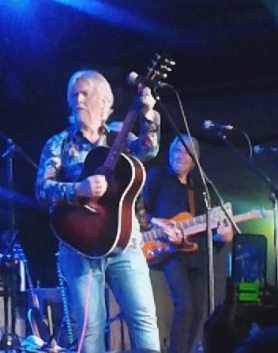 Durant was one of Australia’s most promising and prolific songwriters whose life was tragically cut short. The essence of Andy Durant looms large tonight, with many of the tunes he wrote included in the set. From the Paradise album there is ‘Back Again’, ‘West is The Way’, the title track and ‘Look After Yourself’, probably Stars’ most well-known song. All these tunes are well received by an audience who are up and out of their seats and dancing. Who wants to sit down when the tunes are this good? They want more Durant tunes, so the band deliver ‘Redneck Boogie’ and the stunning ‘Last Of The Riverboats’, both lifted from 1979’s ‘Land Of Fortune’ album.

As songwriters, Durant and Mal Eastick always had the ability to pen songs themed with Australian antiquity, yet still had a contemporary feel and were in no way jingoistic. ‘Last Of The Riverboats’ is a good example of this, as is Eastick’s bushranger ode ‘Land Of Fortune’. The beautifully stark ‘Ocean Deep’, one of the last songs written by Durant, is very well received, and this piece in many ways now serves as a homage to the man – his memory and his music.

Mal Eastick’s playing is, as always, enthralling. There’s a legitimacy to Eastick’s playing that has earned him the reputation as “The Strat players Strat player.” Eastick is Australian rock royalty who, (like Gwyn Ashton), is revered in many parts of the world – and rightly so. His performance tonight is exhilarating. His guitar tone is always music to my ears. Whether it’s to 10 people or 10 000 – Eastick always delivers.

As a unit, Stars are a finely tuned outfit – oozing professional competence. Alongside Mick Pealing and Mal Eastick are other originals in Glyn Dowding and Roger McLachlan. That’s a hell of an engine room. With Nick Charles on second guitar there is no chance of any slack. Charles co-penned many of the quality songs on Boundary Rider by the way. Mighty rock in 2018 after 40 years? You better believe it.

After 120 minutes of a set comprised of classics and soon to be classics, the band close with the colossal sounding ‘Rocky Mountain Way’ to an appreciative audience who have been gripped by Stars’ performance. For those couple of hundred who were hip enough to attend, they witnessed one of the best live gigs in the national capital this year – for those that weren’t there – make sure you get out and see Stars on tour! You won’t regret it.

For tickets, tour dates and more detail go to starsofficial.com