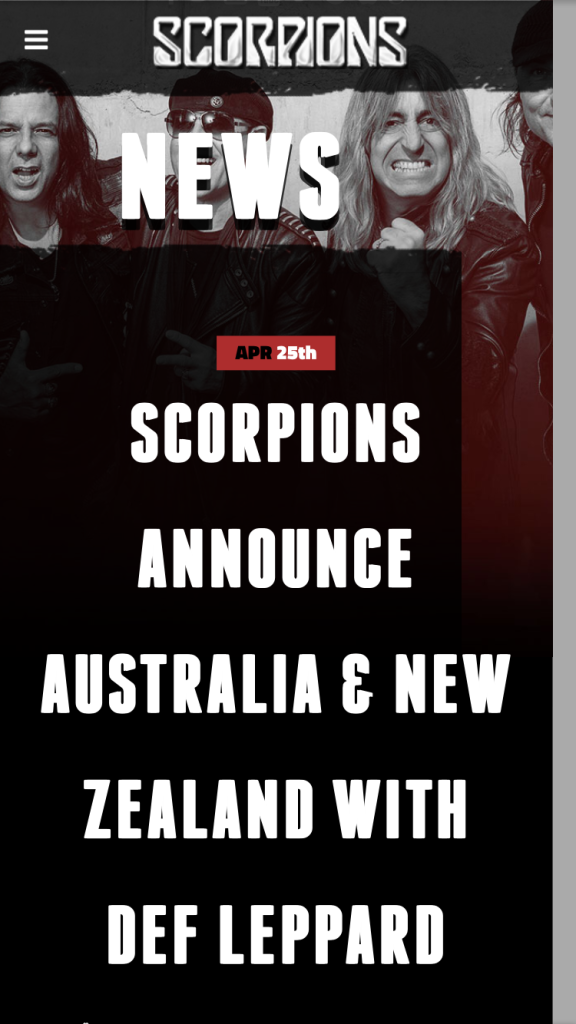 Have received some feedback from angry readers about the recent cancelled Scorpions shows in Melbourne and Sydney – and it’s an issue worth highlighting.

Here’s the deal: Back in April, I noted on the Scorpions website that a trip to Australia was locked in for November – as special guests of Def Leppard.

I was a record buying fan of Leppard in the 80’s – the cool cool riffage contained in the black grooves of their first three albums is undeniable. I even saw them in 1992 in Sydney on their Adrenalize Tour. The show was fairly luke warm and I’d left before the encores rang out. I’d lost interest back then, and had no interest in subsequent tours either. They are pretty much a county fair band nowadays…..Yet the question of a Def Leppard show with the mighty Scorpions on the bill was an emphatic ‘yes’ ! Hell yeah !

Like many others in Australia the Scorpions are the one band who I’d never seen live. During the 70’s, 80’s and 90’s, a tour down under never eventuated. Yet, in April they post a headline which reads ‘Scorpions Announce Australia and New Zealand with Def Leppard’. Remember that headline as it’s important.

Musicians fall ill on tour and shows are cancelled, I understand that and this post is in no way aimed at Meine, who at 70, still manages to rock hard.

The issues which have many of the Sydney and Melbourne ticket holders pissed, is a firm ‘no refund’ announcement from promoter Live Nation, the late announcement of the cancellation, and what other alternatives could’ve been arranged.

By my reckoning, Live Nation posted updates via their Facebook page at 11:36am on the day of the Melb gig and at 12:46pm for Sydney. If you don’t follow their Facebook page – you would’ve missed the news. Like a shmuck, I kept on checking the Scorpions Facebook page for an update on Sydney and even at 5pm there was no mention of a cancellation.

If you look now however, there is a post on the band’s page with a cancellation message at 1:31 pm ? Go figure that out cos I checked all afternoon and there was no mention of it. The edit history shows it was revised at 5:31pm. Yeah I know, who cares, but I sure as hell would’ve stayed home if I had’ve read that early message.

Could the ticket agency not have sent out a bulk e-mail as well ? Just sayin’. Unlike others, when I read online that the Scorps were not playing, I turned around and went home. Did not enter the venue.

Many punters at both shows were apparently unaware the Scorpions pulled out, even after buying up merch and queuing to get in. It was whilst watching fill-in local act Dallas Crane take the stage when it hit them. Poor form to all involved that many fans were uninformed for so long. Were there signs at the venues of the line up change?

Right there and then – at the venue entrance – ticket holders should’ve been able to go up to the ticket window – and been issued a full or partial refund. That’s how businesses should run, or so you’d think.

Could the Scorpions have performed an acoustic set to appease the crowd ? (and let’s face it – the majority of whom were there to see em). The meet and greets minus Klaus still went ahead.

End result is many folks spent up big to travel and indeed attend these shows at Australia’s two biggest cities. I have read that some spent a couple of grand or more on flights, accomodation, ticketing etc. Reason is that the band are loved by many here who have never seen them. First real tour. If there is a next time, for god’s sake just book your own headlining tour like you should’ve done in the first place.

Anyway, many many angry fans were demanding a refund – as The Scorpions cancelled – and have so far been refused. The reason:  “the show has always been Def Leppard – Hysteria Live, Performed in its entirety which still went ahead and as such refunds will not be available.

This is not acceptable and is a cop out.

Fact is – The Scorpions were listed in ALL of the press as ‘special guest’. And the Scorpions are even listed on the ticket.

If you purchased a ticket for this show – with the sole reason being because of the support act listed – who in turn cancel – you should rightfully receive a refund. I am disappointed in Live Nation’s attitude towards fans who purchased tickets for these Def Leppard / Scorpions shows. I have contacted them for further comment and will post an update.