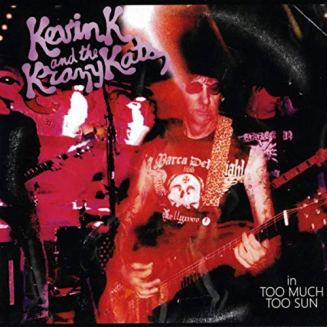 In mid-2018, Kevin K released a new studio album with his Florida based band The Krazy Kats called ‘Too Much Too Sun’, and let me tell you, overall, this is one solid outing of melodic power pop/punk infused with equal parts NYC grime and glam. Kevin K is the one cat (or kat if you will) who understands that a song MUST have a hook at its core. That’s the root of all great pop music right? It’s been his MO since the late 70s. Without a hook – a song ain’t worth a dime. Throw in other ingredients from the KK arsenal – melodic riffs, swagger, groove, catchy choruses – and you soon conclude that this is another killer Kevin K album. For a guy who has released around 40 albums now, most of which come with a 5-star rating, it’s not an easy assignment to keep creating great albums, yet with ‘Too Much Too Sun’, he’s again come up with the goods. The album opens in a big way with the super catchy, self-reflective yearn that is ‘Justify’. Crunchy and melodic, mid-tempo punk with a catchy chorus, peppered with some tasty sax licks that would earn a nod of approval from Michael Monroe or Buddy Bowser. Monster tune. I totally dig the 77 styled punk ode to the NY Dolls that is ‘Stranded In The Jungle’. Complete with lyrical reference / reverence to The Dolls, you also get a dose of rock ‘n’ roll radio and lots of Thundersesque stray-cat licks thrown in for good measure.  With its big dirty garage rock groove, there’s a subtle swagger to ‘Irma’ that’s hard to resist. Bunker down, await the hurricane’s arrival, and try not to fall apart. Lot of cool stuff going on here. Cowbell, big open riffs, rippin’ guitar solo and catchy sing-a- long chorus. Turn this one up, it’s another BIG tune that simply cooks and could be my pick of the album, yet ‘Long Way To Go’ is also a ripper. Thematically, it again shows KK recalling he and his brother’s life in rock ‘n’ roll. Yet as the chorus declares, he’s also been one to look to the future. Can’t look back as he once sung on 13 Street. There’s an oversupply of musical muscle on this tune and purists will also note the opening riff to his own ‘Crime Scene’. Looking forward, looking back – Kevin K has a strong sense of his lineage – both musically and personally, and he often  opens the book and pens tunes about his past, and he does so again on the evocative ‘Under the Influence’ and the super melodic ‘Yesterday’s News’. Yet don’t ever make the mistake of boxing KK squarely into the Thunders/Ramones/Dead Boys mould. Sure, as a songwriter, that’s in his DNA, yet he’s much more than that – and has never been afraid to introduce new styles, sounds and influences to this formulae. Listen to previous albums ‘Allies’ or ‘Deutschland’ as examples of how diverse his song writing skills are. On this album, check out ‘I’m Her Dog’, penned by his bandmate and ex-Murder Junkie Duane Rollick. With its relentless bass groove grind, the banjo riff layered over the top works surprisingly well. I also dig the musical memoir ‘Screwball’ which treads along more familiar dog-eared Dead Boys lines, and also ‘Hurry Up And Wait’, with its neat little riff and Hollywood Brats / Dollsy sass. You can almost imagine Johansen singing this one. That’s a good thing folks! While most others have fallen by the wayside, Kevin K continues to create inspired rock ‘n’ roll like none other. This is one of the top 5 albums of 2018. 9 out of 10. This is out now on Rankoutsider Records.