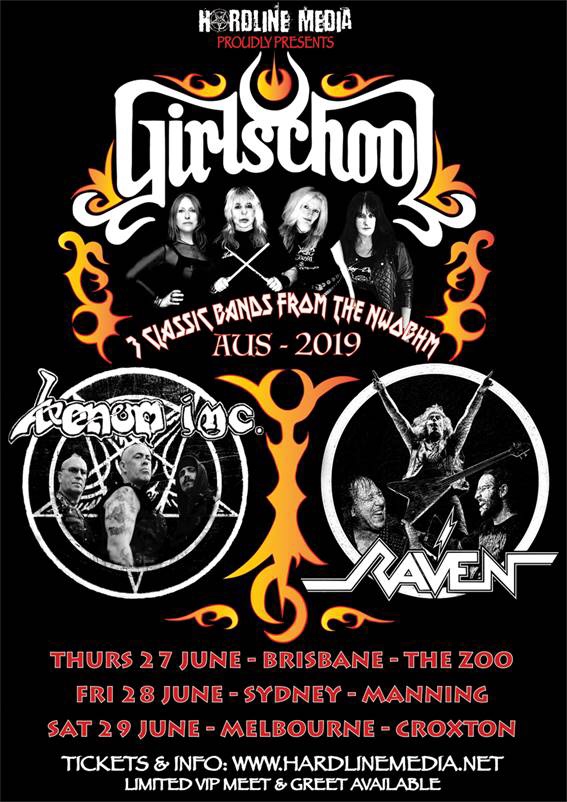 Iconic British rock outfit Girlschool have announced their first ever Australian tour – and are bringing Venom Inc and Raven too !

In the 1990s and 2000s, GIRLSCHOOL focused on shows and tours and made few studio albums. During their career they travelled the world, playing in many rock and metal festivals and co-headlining with or supporting important hard rock and heavy metal bands. They maintain a worldwide cult following and are an inspiration for many female rock musicians. 3 original members, Kim McAuliffe, Enid Williams and Denise Dufort—are still in the band, with long time axe wielder Jackie Chambers on guitar.

Formed as Venom in 1979 in Newcastle upon Tyne, England. And coming to prominence towards the end of the new wave of British heavy metal, Venom’s first two albums—Welcome to Hell (1981) and Black Metal (1982)—are considered a major influence on thrash metal and extreme metal in general. Venom’s second album proved influential enough that its title was used as the name of an extreme metal sub-genre: Black Metal.

During the 80’s, Venom were THE extreme band, releasing more classic albums such as At War With Satan, Possessed and countless classic, live albums, such as the Assault live album series and the legendary Eine Kleine Nachtmusik Double LP and the The Seventh Date of Hell: Live At Hammersmith Odeon Video which helped launch Metallica, who were the support band for Venom’s tour.

RAVEN are that rare thing in music true originals – cut these guys with a razor and they will BLEED true heavy metal!!!  Hailing from Newcastle Upon Tyne in North East England back in 1974 (yes – 44 YEARS ago!!!) the brothers Gallagher cut their teeth playing the pubs & clubs until solidifying their line up in 1980 with drummer Rob Hunter.  The trio went on to release three of the most influential metal albums of the NWOBHM (New Wave Of British Heavy Metal) on the Neat records label which in turn inspired every band of that era and beyond. Basically, without RAVEN you just might not have had thrash/speed metal…. after all, the band did give Metallica & Anthrax their first tours!

LIMITED VIP MEET AND GREETS AVAILABLE, MEET ALL THE BANDS AT ONCE