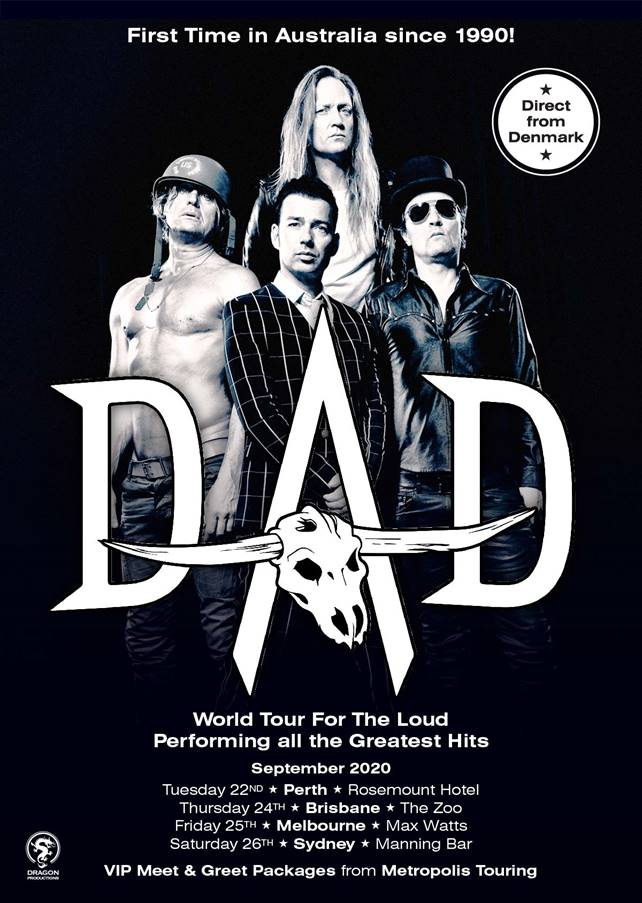 D-A-D were one of the most unique bands to come out of the 1980’s European hard rock scene. Originally called Disneyland After Dark, D-A-D abbreviated their name to forge their own identity away from Walt’s watching and litigious eye. A fact that feels like less than a footnote after such a long and prestigious career.

D-A-D surged onto the international scene with their 1989 album, No Fuel Left for The Pilgrims propelled by hit singles Sleeping My Day Away, Girl Nation and Jihad. Never one to rest on their laurels, D-A-D continued to push the envelope with their records, always evolving with the times, while never straying from the core sensibilities that brought them their success. This enabled D-A-D consistent acclaim from both critics and fans alike, where many of their peers faltered. Their most recent record, last year’s Prayer for the Loud represents all the most classic elements of D-A-D; Jacob Binzer‘s unique guitar tone, catchy melodies, monstrous choruses, poignant ballads and all given that unique D-A-D charm by way of Jesper Binzer‘s raspy yet powerful vocals.

D-A-D have continued a schedule of consistent touring performing to thousands of fans. With only a single line up change, over 20 years ago, in a career spanning almost 40 years, the live chemistry of the band is unparalleled. Whether in clubs, arenas or outdoor festivals, D-A-D’s live show is sure to enthrall fans and newcomers alike – especially with this career encompassing 35th Anniversary setlist! This is a once in a generation tour for Australian fans who after a 30-year wait will finally get to witness what European audiences have been indulged in for the last three decades.