Following the 2018 release of their seventh album Satin Returns, Melbourne’s masters of pop’n’roll, EVEN return with DOWN THE SHOPS, a newly-minted, beautifully presented vinyl collection of covers they’re released along their journey.

Ever since working up a rocking version of Badfinger’s “No Matter What” in their early mid-‘90s days playing the pubs around Fitzroy and St Kilda,  Even have usually had a cover or two on the go. And they weren’t adverse to working up a load of them; they did Even Jukebox performances every year at Melbourne’s illustrious Cherry Bar for a while where it was all covers and themes, like an ‘Even Stevens’ night where all the songs were written and or performed by a Stephen, Steve or Stevie, and Ziggy Stardust from start to finish for the album’s 40th birthday. They were also the house band on The Heart of St.Kilda benefit gigs at the Palais for quite a few years where they backed Daryl Braithwaite, Adalita, Normie Rowe, Kate Ceberano, Tim Rogers and many more.

Originally appearing on singles and tribute albums, the tracks included on Down The Shops go right back to covers of the Kinks’ classic “Til The End of the Day” and Gary Valentine’s Blondie power pop masterpiece “(I’m Always Touched By Your) Presence, Dear” which appeared as B-sides on Even’s early CD singles. The most recent track is a cover of the Meanies’ “The Reason Why” which appeared on a split single the band shared in 2019. The album’s track listing reads very much like a list of the band’s influences – including Beatles, Yardbirds, formative Australian inspirations the Sunnyboys, Hoodoo Gurus and Stems, and classic ‘90s power poppers the Posies, whose 1993 classic “Solar Sister” was on regular rotation when Even formed in early 1994. A couple of unexpected highlights include a great version of the MC5’s “Shakin’ Street” (which appropriately originally appeared on the B-side of their “Rock’n’Roll Save My Life” 45),  and the brilliant “True” by Sydney ‘90s indie supergroup Carton featuring Mandy Barron, Smudge’s Alison Galloway and Screamfeeders’ Kellie Lloyd. Taking the cake for unexpected however is a roaring and swinging never-before-released version of the Sex Pistols’ “Pretty Vacant” from a 2014 Jukebox gig at Cherry.

Their stunning cover of the Masters Apprentices “Living In A Child’s Dream” appropriately shows off Even as true current day masters of a school of classic Australian guitar-based melodic rock that dates back to the ‘60s. Of course, Even’s singer/guitarist /songwriter Ashley Naylor has backed many of Australia’s great singers from earlier eras as a member of the Rockwiz Orchestra, and even more as a member of the Countdown Spectacular band in 2006 and 2007. An in-demand guitarist, he has also worked over the years with Tim Finn, Stephen Cummings and others, and as of now is a long term member of Paul Kelly’s band. In recent years he has also been part of a dynamic ‘60s covers band Thee Marshmallow Overcoat alongside fellow Melbourne guitar legend Davey Lane and drummer Brett Wolfenden, and he is also now a permanent fixture in both the Stems and the Church!

Not to be outdone, Even bassplayer Wally Kempton still holds down his spot in the Meanies and runs the very record label (and management and bookings empire) that is releasing Down The Shops this January, amongst many other things. And drummer Matt Cotter is also an accomplished artist who these days spends a lot of his time in the Northern Territory working with indigenous artists. The gorgeous painting on the cover of Down The Shops is of course one of Matt’s, and yes it will be available as a t-shirt.

Down The Shops is out now. 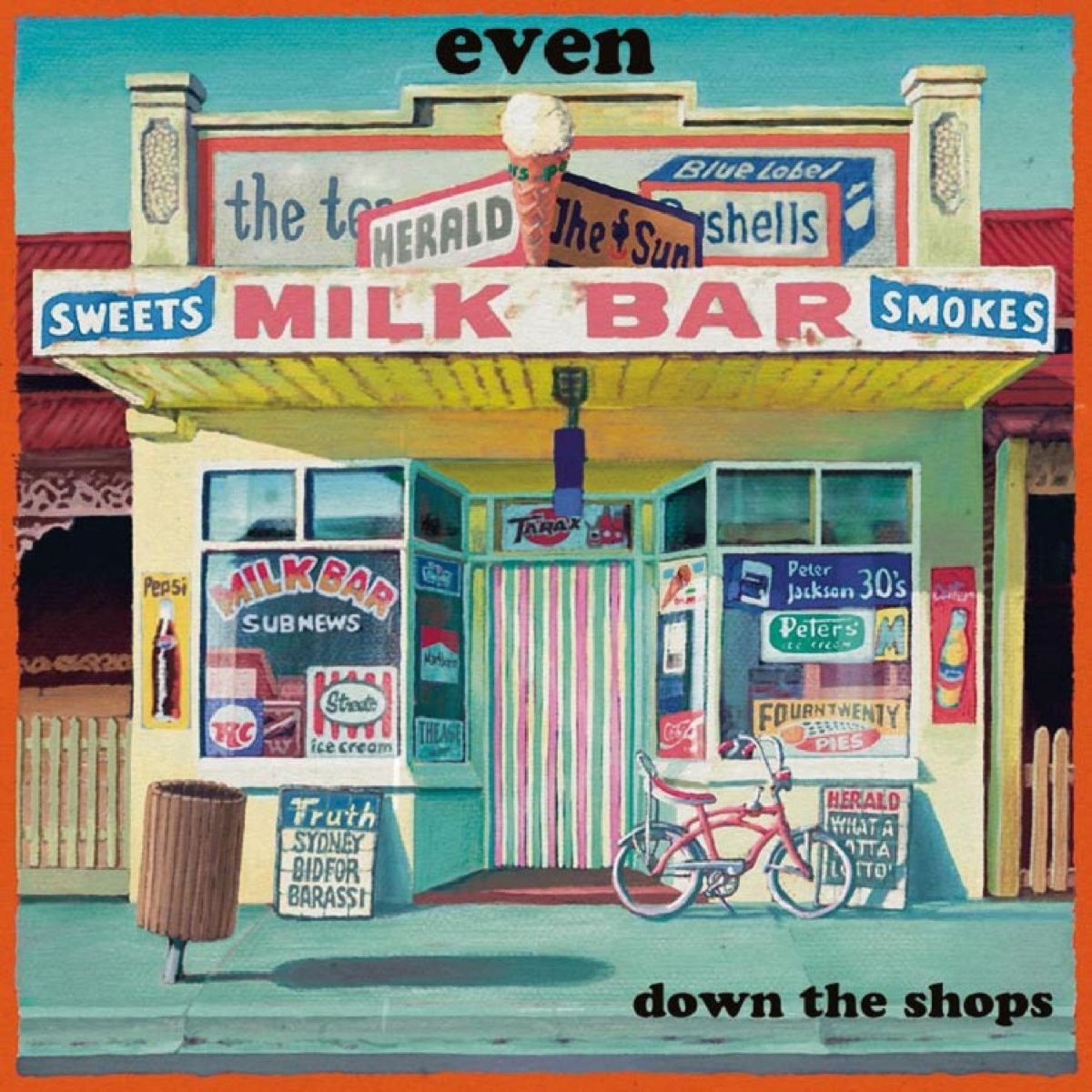